Bandhavgarh National Park is located in in the Umaria district of MP, India. This park is one the best sights to trail the majestic Bengal tiger in their natural habitat. The core area of the park is spread over 100 km² and is home to more than 50 tigers.

In Bandhavgarh, tourists are allowed into the park twice each day for 3-hour Jeep safaris, once at dawn, and again in late afternoon. There are no premium zones and the National Park has been divided into three main safari zones, namely – Tala Zone, Magadhi Zone and Khitauli Zone.  Tala Zone is the oldest and richest zone in terms of biodiversity, mainly tigers.

Jeep Safari
Open 4WD Gypsies are normally used as safari vehicle. The Jeeps stick to well-worn tracks but the Park covers a large area and you’ll often end up on your own. Maximum 06 members are allowed to sit in a jeep and you cannot visit the Park without a Jeep and a guide.

Elephant Safari
Elephant are used every morning by the forest department for Tiger – tracking. If Tiger is spot then the elephant will take you directly to the Tiger by a nearby jeep/car.  A forest department guide must always accompany you with a naturalist from our side (optional). This guide will be able to direct you and point out wildlife.

This cost is per trip entry fees for one jeep for 6 persons.

₹2000 per person for 1 hour during Maghadhi Zone jeep safari at morning.

New Year, Holi, Diwali are peak season timing, its recommended to book park permits, jeep and hotel well in advance during that period. How to plan for Ranthambore! 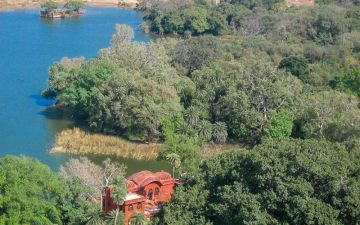 Things To Do in Ranthambore